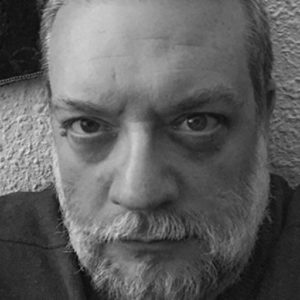 David Cox is a filmmaker, artist, writer and teacher based in San Francisco. His films include Puppenhead, Otherzone, and Tatlin. He holds a Masters Degree in Animation & Interactive Multimedia
(RMIT 2003) and a Bachelor of Education from Deakin University, Melbourne. His books include the nonfiction Sign Wars: the Culture Jammers Strike Back, published via LedaTape as well as the novella Dr Yes & The Mystery of the Mission also published via Ledatape (Winter 2013). He is a musician and performer, most recently staging a 3-part Rocket Opera about the Cold War and the Space Race.
He teaches at the Design & Industry Department at San Francisco State University as well as at both the Computer Science Department and Visual Media Design Departments at City College of  San Francisco. With his wife Molly Hankwitz he has formed the Bivoulab design studio.
“My work revolves around technology and identity and how these in turn relate to social and urban space. My books and films are about how people are mediated by technologies and media that act as extensions of themselves.”
David Cox, 2015